No Need For A Seasoned Professional Here

The challenge of a week ago with the back two feet of the trailer has been solved. I posted last week that we had a slight rise of the last two feet of the right wall. Even though the wall height from the floor was the same all along the wall. After crawling underneath the trailer and doing some poking around it looks like the floor sandwich for whatever reason was not pulled down tight to trailer. The screws we used to fasten the trailer to the floor supports were holding the floor off the trailer. The bolts pulled the floor tight but did not move the wall as it is screwed and glued to the framing. You can clearly see the gap on the 2-2x4's. Since we are putting sheathing on the inside of the wall to give us a full manufactured wall this is not an issue structurally. I will say this has caused some angst with my framing partner even though I tried to blame myself for the problem. Even taking the screws out of the plywood did help in trying to get the wall down. Our solution at this point was to trim the top plate. We are NOW perfect around the entire top perimeter by a 1/16 of inch. It was time to move on to the next task.
So for next steps we put all the bolts in around the base of the framing tying the walls to the trailer. I will have 18 bolts total and probably a hundred plus screws into bolted trailer cross braces. I think we are secured to the trailer.  We cleaned out all the Window openings and tested out fitting a window. Pretty cool to see that in place. 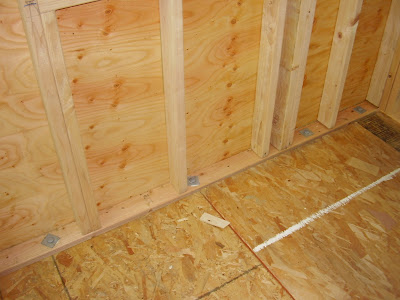 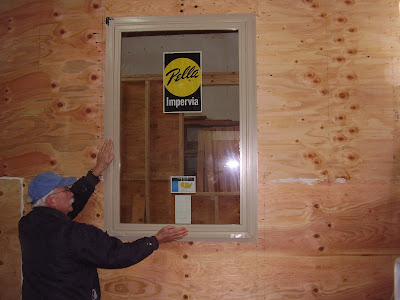 I moved the Shower in to the cottage as we had a plumber come out and give me an estimate to hook up all the propane. While I feel I can do all the water plumbing getting some good advice is always beneficial. He was great and I will hire him to do the Propane as I would like that done with an eye to quality. Not really interested for things to go "bang" in the night. For that matter I don't like the smell of rotten eggs either so making sure it is installed professionally is a good decision. He thinks he can do it all for $300 plus materials. That is a good investment in my mind. Here is what the Propane Heater looks like. 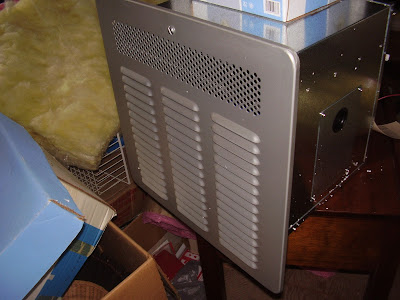 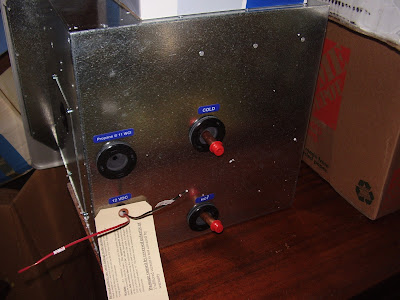 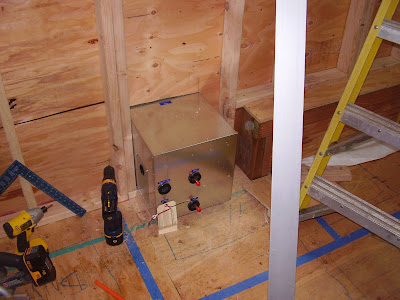 So with it soft installed we moved to the shower. It fit in through the window and it now has a home in the corner. We will box it in next weekend and put down a foundation pad for it. I am going to plumb it on the right side so no pipes will be behind a perimeter wall. 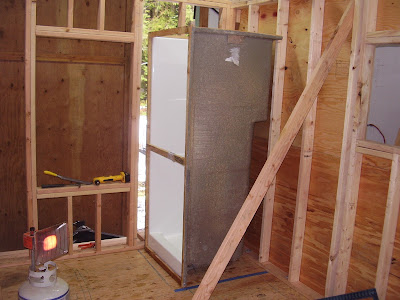 Next we started looking at the loft mounts. Stet put in braces a long the wall where we will put in Stimson stud braces and run 2x4's across the span every 16 inches. We are going to use 3/4 plywood for the loft deck, screwed and glued to the 2x4's. That will help structurally and should look nice as we are using a fancy grade plywood. This should have a nice appearance when I am entertaining up in my loft. You see that we are putting these in far lower then the top of the wall. We are planning on having 6 foot 5 inches of head room under the loft supports. This adds 10 inches of headroom to the loft and gives 10 inches of wall before the ceiling pitch starts. 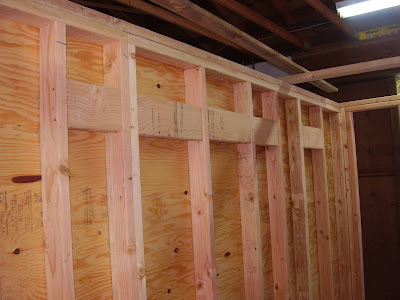 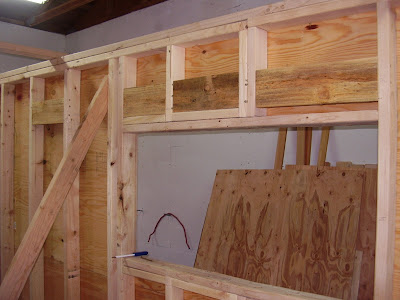 So for next weekend we are looking at boxing in the shower, cutting in the drain hole. Mounting the loft braces and putting in the 2x4's. I will also start on the wiring. Exciting!
Posted by zboatman at 9:04 PM