Sheathing and prep for next steps

We spent a good portion of Saturday getting the Cottage square. We ran string down the wall and down the top plate to see where we needed to adjust. The first wall we built, which if looking from the outside would be on the left was a little challenged. We noticed a lift on the back two fee of wall and felt the need to take the trailer down off the jacks and see if that would solve the issue. It did not, Hmmm. After some fidgeting with the wall it trued up pretty well but the lift in the back could not be corrected. Stet suggested just using wavy trim. That did not really fire me up.

Here are three shots of the string lines we used. One looks a little off due to the angle of the camera. The wall was really pretty straight so it was braced. 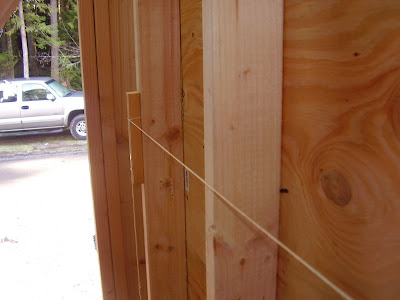 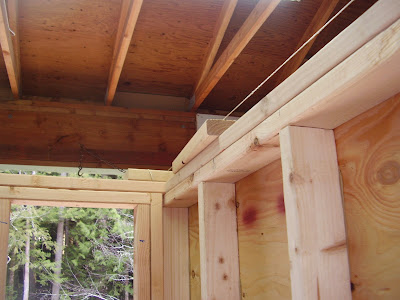 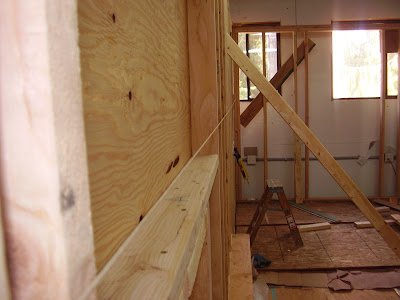 Once we got both walls trued and braced, we commenced with screwing a gluing. The weather was a bit brisk and we found the glue was not real sticky, we had to run a heater to get it up in temperature. I think it was in the high 20's on Saturday till about noon. It is hard to work in fuzzy gloves. 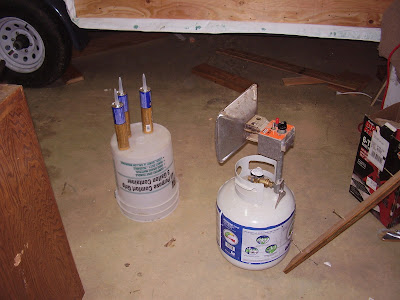 We have both long sides done, and will finish the ends next weekend. I will be drilling the holes for the bolts that I started right before I had to boogie back home to get ready for work. Feel good about where we are at, we have a lot of options on what exactly we are going to do next and in what order. I expect we are four weekends away from pulling the trailer out to put on the roof. I need a good weekend and some extra hands as I want to put the entire roof project into one weekend if I can. Rain can ruin this parade so we have to plan carefully and stage as much as possible so that all we have to do is assemble it. Here are some shots of the trailer as it sits before I left. 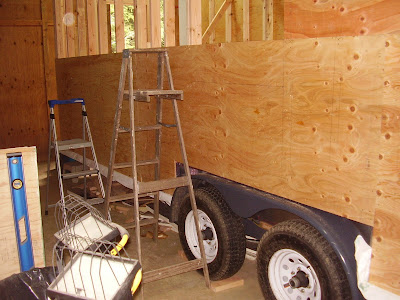 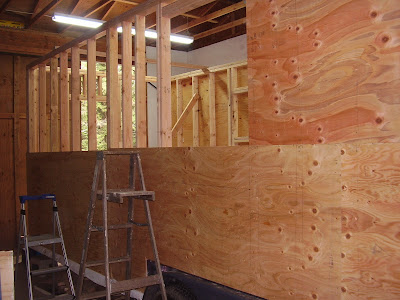 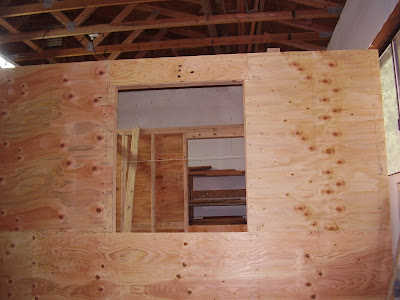 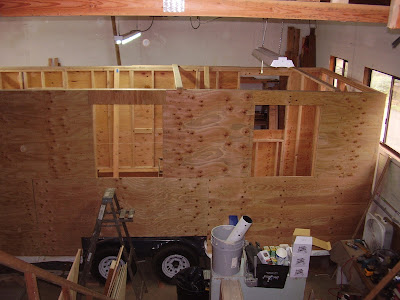 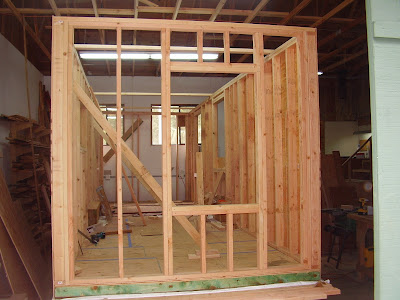 It case anyone was wondering we ran the plywood horizontally, with ample construction adhesive and screws at 8 inches around the perimeter and 12 inches in the field. I am using 1 3/4 inch screws on the 1/2 CDX. On this last picture it is hard to tell but we have two wall braces and two braces across the top plate. I was surprised at how square the end walls were once we got the side walls true.

I am now at weekend number 6, time spent is generally 26 hours man hours a weekend so when you multiple that out we have put in around 156 man hours to this point. We only work weekends and there are a couple of trips to the lumber store in the total. I do try to buy stuff during the week and bring it up on weekends if the weather allows. We guesstimated around 400 to 500 man hours. What ever the total ends up being, if I build a second one, it will take 100 hours less. While we are not inventing the wheel here, we definitely don't have a road map and just forge along until one of us calls stop and then we evaluate whether we are making the right decisions. My type of project, I am enjoying the journey!
Posted by zboatman at 7:19 PM